My sister and I headed down south to the City of Tongyeong this weekend. Our main purpose of our visit was to indulge in oysters, since we are still in oyster season. We decided to go to Tongyeong by bus from Express Bus Terminal in Seoul. It took about 4 hours to get to the other side of the country and it cost $32,000 won each way. The bus dropped us off at Tongyeong Central Bus Terminal, and we took a taxi to the harbor. Our first stop was an oyster restaurant, which was recommended by two friends.
We ordered the $20,000 won set. This set came with oysters cooked in many different ways. It was impossible to eat it all. 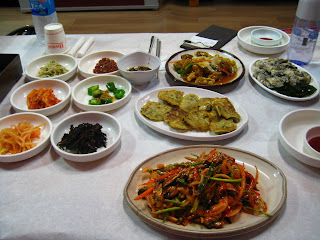 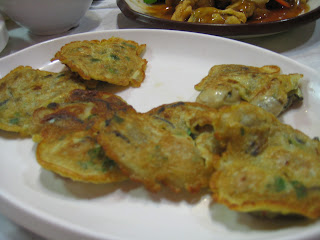 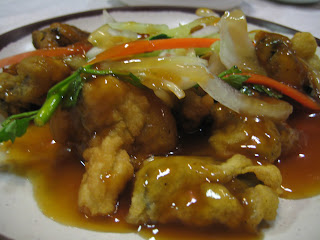 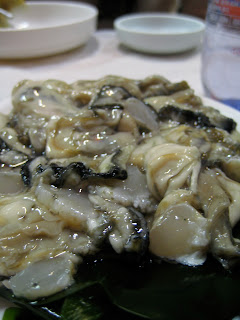 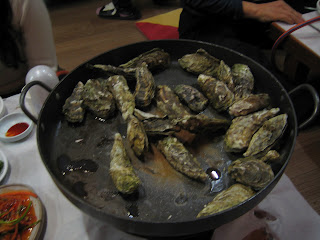 After lunch we looked for a place to stay. I was not able to find any hotels online but there were actually many hotels and motels to choose from. Some of the hotels where Labelle Hotel, Bay Condo Hotel, Tongyeong Hotel Gallery, Hansan Hotel and Tongyeong Anchovy Tourist Hotel, which is where we stayed at. It was a little more expensive that we planned on spending, but we where to tiered/lazy to look for anything else; we also didn’t want to waste time. The hotel was nice and the staff was very friendly. 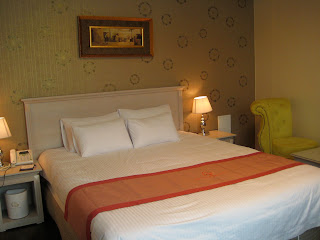 It was forecasted to rain all weekend and we wanted to take advantage of the time that it was not raining, so we went to Mt. Mireuksan by cable car. The weather was very gloomy and by the time we got to the top it got very foggy. If the weather was better, the top would have given us a nice view of all the small islands we were surrounded by.


Once we got back to the bottom, we needed to figure out what else to do. We wanted to go to Dara Park to watch the sunset, but we knew it would be a waste of a trip since the weather was not that nice. We stopped at the tourist information center and asked where the Dongpirang Wall Painting Village was at. Next thing we know, one of the employees offered us a ride since her shift had just ended. Not only did she take us to Dongpirang, but she also gave us a tour of the “village”. Dongpirang was on top a hill and many of the walls where painted. Each wall had a different theme. 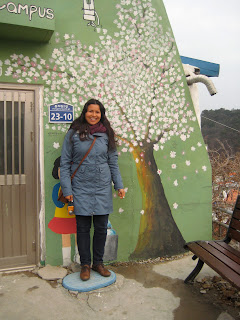 Once we finished, our new friend wanted to take us back to our hotel but we still wanted to explore the city and we told her we would walk to the Traditional Market since it was just down the hill, but she insisted on giving us a ride. She dropped us off at the Cultural Plaza and told us she would be at the Tourist Information Center that was close to the plaza and told us to visit her again. Once we said goodbye, we walked around the market. The market had a variety of dried and fresh fish. We also had the opportunity to watch a lady open an octopus’ head with her bare hands to remove the ink and whatever else was in there. I have to say that experience was a bit traumatizing since the octopus was alive and still moving during and after all this.

Each city in Korea is always known for something. Tongyeong is known for their honey balls and tiny kimbop. After looking at our selection of honey balls vendors, we chose a location that they were making them fresh and they were still warm. Each pastry was filled with either yams, pumpkin, green bean, red bean and at one location it was filled with something that tasted like citrus. The dough was fried and it almost tasted like a doughnut. Then each ball was drenched in honey, which was more like syrup and topped with different kinds of seeds. 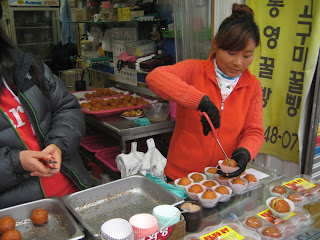 For dinner we had kimbop. It was a lot smaller than the kimbop we are used to, and it was not stuffed with anything. It was just rice and seaweed. The kimbop was served with a seafood kimchi that was spicy and was a good combination with the kimbop. The restaurant we ate at served only this and while we were there many people came in to take some to go, which the restaurant had packed in advance. 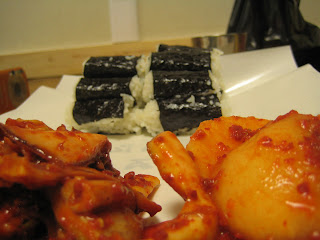 Sunday morning we went to the Culture Plaza to visit our friend and we brought her some honey balls. While we were there, some policemen came to talk to us and recommended we go to Hansando Island. After we talked to our friend and her coworkers we decided that we could make it to the island and back in time to take the bus home. We walked to the Tongyeong Ferry Terminal and took the 11:00 am ferry. The ride was about 30 minutes. The ferry had an outside area and the inside there was lots of room to sit on the floor. Many people had come prepared and where eating on the ride to the island. 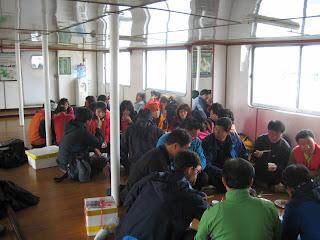 Once we arrived to the island we didn’t know where to go. It seemed like everyone was getting on a bus, which was free of charge. So it seemed like a good idea and we decided to do the same, luckily we showed someone where we wanted to go and they told us we had to walk there. Who knows where we would have ended at if we took the bus. We walked to Jeseungdang Shrine. The walk way was lined with trees on one side and water on the other. It was very beautiful and the most nature we have seen in a while. 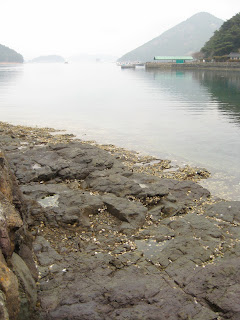 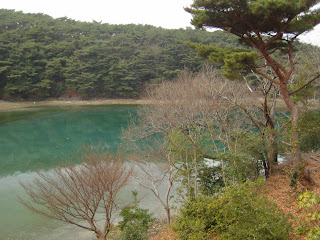 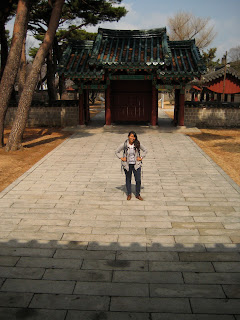 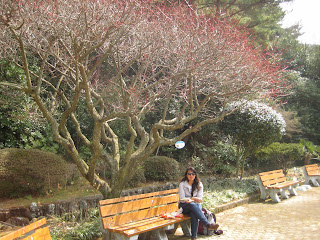 Once we got back to the Tongyeong City we picked up some kimbop and seafood kimchi to-go to have for lunch/dinner on the way back home. I wish we would have had more time to eat at the oyster restaurant again. I would definitely go back just to eat. I also think it would be beautiful during spring with all the flowers blooming, and great in summer to swim since the water was so clean and clear.
Visiting Tongyeong has been one of my favorite things I have done in Korea. I think I even liked it more than Busan. The people of Tongyeong were so friendly and kind. All day Sunday we were approached my many people young and old who just wanted to say hi or ask where we were from. Maybe it was because we where away from Seoul, but it seemed like we were in a different Korea.

Email ThisBlogThis!Share to TwitterShare to FacebookShare to Pinterest
Labels: Tongyeong